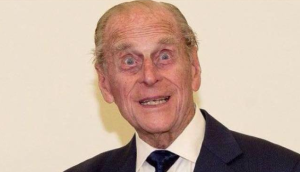 The weeping & gnashing of grief was heard all over the monarchist wing of social media at news that Phil Windsor had croaked at the age of 95. When Buckingham minions announced he is still alive & farting up the palace, monarchists went from grieving back to vapid groveling without missing a beat.

It will be so hard on them when the news breaks that Phil actually died many years ago & his persona maintained only due to developments in the art of taxidermy. Courtiers, who for obvious reasons cannot speak publicly, verified his death at least 40 years ago. But if Betty was to maintain feudalism without a guillotine in the future for the whole rotten lot of them, she had to lay to rest her beloved “anus horribilis” lest his irrepressible racism single-handedly bring the moochocracy down. It was either quietly sending him to the netherworld or putting a muzzle on him in public & the latter would have been so plebeian & unseemly.

No slouch when it comes to groveling over moochocracy, US media reports he is still alive & will be retiring from official duties. Can they offer any proof of his existence? Or of any official duties where he will be missed? They find his racist insults endearing & refer to them as politically incorrect gaffes & faux pas. Betty thought them endearing also until they threatened to destroy the British Commonwealth–which would not have been a regrettable outcome from the point of view of its subjects.

This is a photo of taxidermal Phil who is now stored in a broom closet but gets rolled out for ceremonial occasions.