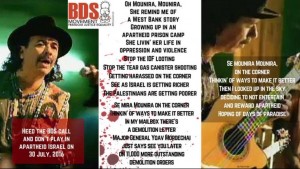 In 2010, Santana pulled out of a scheduled performance in Israel citing scheduling difficulties. Palestinians & BDS activists, giving him the benefits of respect, presumed it was a result of our appeals to honor the cultural boycott of Israel.

After the massive bombing siege of Gaza in 2014, Santana would surely have realized the wisdom of his decision, even if it was only over scheduling conflicts.

But now it is announced he will perform in Tel Aviv on July 30th as part of his Luminosity Tour. Luminosity means the brightness of a celestial object or the rate of emission of radiation. Looks like our man has chosen to emit toxic radiation from Tel Aviv.

In a statement to the press, his manager denied his 2010 cancellation was due to BDS. He said, “Carlos Santana is a citizen of the World & he plays his music & spreads his message of Love, Light & Peace wherever he goes. Carlos believes the World should have no borders so he is not detoured or discouraged to play anywhere on this planet. We look forward to performing in Israel this summer.”

So there you have it! Our man’s a weasel who drools poetry to cover for supporting apartheid. But we need to make damn sure, if we can’t stop him from disgracing himself, that the whole world knows just what kind of weasel he is.

Please sign this petition circulated by Jewish Voice for Peace asking him to cancel in respect for the cultural boycott of Israel & for justice.