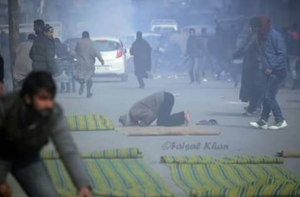 Since peace & good will to all humanity is the heart of the Christmas spirit, we should keep in mind that in Kashmir the Indian occupying army didn’t miss a beat in its repression of Muslim religious traditions & here is attacking Friday prayers with tear gas.

The Burmese fascist regime & the Bangladeshi government are discussing how to forcibly relocate our Rohingya brothers & sisters back to the killing fields of Arakan state & the Israeli occupying army is brutalizing little kids, arresting freedom fighters, & even attacking Palestinians dressed as Santa Claus with no respect for Christian or Muslim traditions.

Christmas isn’t a time to forget the politics of oppression but a time to recommit to our common humanity in the struggle against war, occupation, genocide. No human being, whatever their religion, is alien to us.

We stand with Kashmiris, Rohingya, Palestinians, Syrians, Iraqis, Yemenis, Somalis, Afghans, Libyans, refugees from wherever they are.