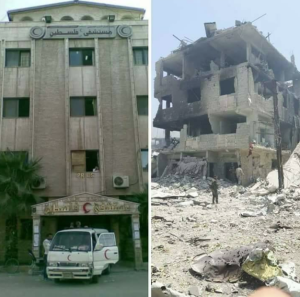 Yarmouk apocalypse: this is Palestine Hospital in Yarmouk Palestinian refugee camp before & after Syrian & Russian bombers “liberated” the camp from ISIS. The Assadist song & dance explaining its violation of international law in bombing medical facilities is that ISIS fighters hole up in hospitals. We’ve heard that before when Israel bombed Gaza for seven straight weeks in 2014.