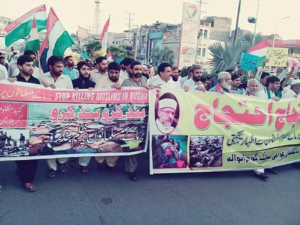 In 2015, Pakistan sold 16 JF-17 fighter jets to the Burmese military & earlier this year began negotiations to have it produced in Burma. The JF-17 is a multi-purpose death machine which can do aerial reconnaissance, infrared search & track, ground attack, aircraft interception, & deploy different kinds of ordnance. To be used against which country? Is Burma at war with any of its neighbors? Certainly not with India, China, or Bangladesh. So are they using them against the Rohingya or any of the other ethnic groups the regime is at war with in Burma?

Pakistan joins Israel, India, Russia, & China in providing armaments to the Burmese junta. Can the military which runs Pakistan play an emancipatory role in Kashmir whilst selling weapons to the junta to carry out genocide against the Rohingya people? It’s a serious political question that must be answered, not a provocation.

As a political counterbalance to the Pakistani military, there have been several protests in Pakistan in solidarity with the Rohingya people. This one was in Gujranwala. Our deepest respect.