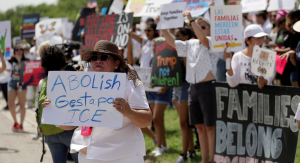 The most important US news, other than its several wars, is the Trump policy of kidnapping small children & jailing their parents. There were at least 2,551 children put in detention centers, not including the 10,000 unaccompanied minors crossing the border. The government is under court order to reunite those children with their families & what has become clear in Trump’s continuing defiance of the court order is that they were separated from family with no accounting for future reuniting. Some were sent to detention centers several states away from where their parents were detained. Now DNA tests are required to know where the children are & who their parents are. Some have been handed off to human traffickers & will not be found. Such is the criminality of US immigration policy.

On June 30th, hundreds of thousands marched at the Families Belong Together marches across the US. There were only several hundred here at ground zero in McAllen, Texas. The immigration rights movement here is very much mortgaged to the Democratic Party which keeps public protest to a minimum level. The largest protest was 1,500 people called by the ACLU in Brownsville, about one hour east of McAllen. Whilst tens of thousands could be mobilized, the main immigration rights group here is calling for a 24 hour fast & 24 days of prayer in place of public protests. In human history, prayer has seldom been considered sufficient, even by the most religious political leaders & activists, against the predations of political power. God helps those who help themselves.

The Trump “zero tolerance” policy was not defeated by the court order on reuniting children with their families. Still in the works are attempts to hold refugees indefinitely with or without their children. The only acceptable policy is open borders for all refugees. No human being is alien to us.

(Photo of McAllen Families Belong Together rally from Al Jazeera)