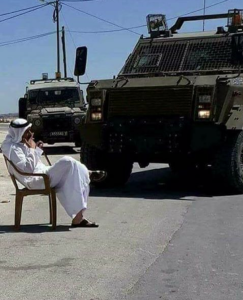 Lately there have been comparisons made between the Israeli military in Palestine & the Indian military in Kashmir suggesting that the Indian army is more brutal because the Israeli army is guided by a principled code of conduct. Where the hell does that rubbish come from?

This June 2nd article in Indian Express titled “Lesson from Israel: Those who invoke Israeli army example in J&K must educate themselves about its code of ethics” by D. S. Hooda, a general in the Indian army, should clear up any delusions about the character of the Israeli army. He lays out their monstrous crimes against Palestinians quite clearly going back decades. And he only scratched the surface. The Israeli army portrays itself as the “most moral army in the world” based on the hyperbole & lies of retired British Colonel Richard Kemp (quoted in the article). Kemp has been deployed in Northern Ireland, Bosnia, commanded British forces in Afghanistan, & boasts of collaboration with the Israeli military & with Mossad, Israel’s secret service.

He testified before the UN Human Rights Council that Israel committed no war crimes or crimes against humanity in its 22-day 2008-2009 carpet bombing siege of Gaza when 1,387 to 1,419 civilians were killed; nearly 6,000 were injured (some permanently disabled); 22,000 buildings, including schools, homes, public buildings, were destroyed; 20,000 people were made homeless; the electrical, water, & sewage infrastructures were bombed to smithereens. Human Rights Watch accused the Israeli military of “wanton destruction” but our man Kemp told the UNHCR that the Israeli military “did more to safeguard the rights of civilians in the combat zones than any other army in the history of warfare.” Kemp is so filled with hate that he wouldn’t know a human rights crime if it shot him in the ass & almost certainly has more than his own share for which he should be prosecuted.

The cynicism & the intent of this Hooda article is summed up quite clearly in his final paragraph: quoting Plato, he says “it is the reputation, not the reality of goodness that is desired, for nobody ever does right simply because it is right.” This may be a cynical view but it is realistic. It is squarely on the military leadership to ensure a reputation of ethical behaviour.” In other words, the Indian army has to get its propaganda game on to silence & counter the voices of Kashmiris on social media who have done more than enough damage already exposing military impunity for pellet guns, mass incarceration, mass rape, forcible disappearances, mass graves, torture, extrajudicial executions. Too late General Hooda. Suck it up. The lies haven’t worked for Israel & they aren’t working for India. You’re approaching the end game of the occupation.