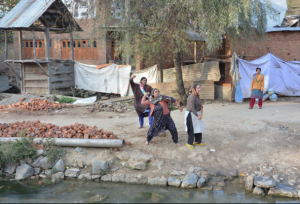 Because they’re such a rebuke to Islamophobic rubbish about saving Muslim women from their men & religion, the images of Palestinian & Kashmiri women stone pelters are always worth posting. But this was no ordinary stone pelting incident. These Kashmiri women were pelting at CRPF (counter-insurgency) troops to protest the killing of 19-year-old Kashmiri Zahid Rasool Bhat on October 9th, 2015. When I investigated the incident of his murder, this photo took on more gravity; the story requires serious attention.

Zahid Rasool Bhat was a trucker traveling back to the valley from New Delhi, India. A Hindutva nationalist goon squad who suspected him of transporting beef in his truck stopped the vehicle on the highway. Beef is eaten by Muslims but considered sacred by Hindus & more sacred than human life by Hindutva nationalists. The goon squad assaulted him & then set him on fire with petrol bombs in the cab of his truck. At that time, it was the third instance when a Muslim man had been murdered over beef. Not that it mitigates anything, but according to a credible report, Bhat was carrying coal in his truck, not beef.

The then Chief Minister of the state condemned the killing & offered the Bhat family compensation of about $7,700 & a government job. There’s something so venal about such an offer for the loss of a beloved son. Five nationalist thugs were arrested for murder, rioting, conspiracy, & explosive charges but there is no report on the legal actions against them. The incident was caught on security cameras so the murderers didn’t have a leg to stand on for defense. There was media blithering at the time about “communal passions” aroused between Hindus & Muslims over beef but that’s nothing but an alibi for the intolerance & hatred of nationalism whipped up by the Modi government against Muslims in India & Kashmir.

Our belated but sincere sympathy to the friends & family of Zahid Rasool Bhat. Today is the anniversary of his funeral attended by thousands of Kashmiris in his native town of Batengoo. May he Rest in Peace.