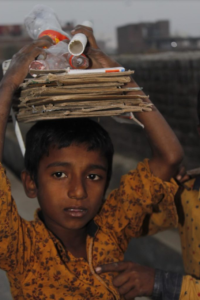 This little guy is a Rohingya refugee living in Jammu where they are under persecution by Hindutva nationalists campaigning to get them deported. He gathers recyclables to help his family survive. That’s what he’s carrying on his head. Modi is now attempting to deport all 40,000 Rohingya refugees in India. A cruel genocidal sarcasm: the Burmese junta is using Indian weapons to execute or drive out Rohingya & doesn’t want them back.

One of the most important issues facing the Rohingya people is refugee rights. It’s imperative that we stand with them in fighting for the right to asylum in other countries, not just Bangladesh. That means not just the right of entry but to residence & work papers, to attend schools, get medical care, get social services. We should include demanding that those several countries that have imprisoned Rohingya refugees give them full amnesty to reunite with their families.