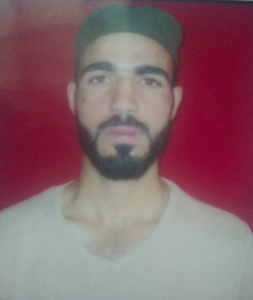 This young Kashmiri man’s name is Shahid Bashir Mir. The story of his death isn’t unusual & that’s what makes it so outrageous. Reports differ on his age but most sources say he was 21. His dad, who is a carpenter, said his eldest son left home late Monday afternoon to buy cigarettes at a local shop. Some reports claim he left home Monday morning with a herd of sheep for grazing in the forest but he was a college student & not likely to be working as a sheep herder. They may have thought that because his body was found in the forest where the Indian Army was engaged in a hunt to kill operation.

When he didn’t return home, his family went looking for him & also filed a missing person report at the police station. When your son doesn’t come home in a country under military occupation it must be cause for considerable alarm.

This is where the story begins to fall apart & indicates the need for a formal investigation. Shahid was reportedly killed on Tuesday, the day after he went missing. That must have been determined by the medical examiner. Did the army kidnap him on Monday & hold him? Where did they kill him? Walking down the road? In crossfire somewhere? In the forest? Was he taking a shortcut to the cigarette store through the forest? Some reports also claim his face was disfigured with acid. His funeral photos show that something was done to disfigure his face. That would indicate torture or mutilation of a corpse. Those allegations have to be disproven or prosecuted.

Apparently the army notified the police on Tuesday that an unidentified body was lying in the forest & requested them to pick it up. The police later confirmed that no weapons were recovered with Shahid’s body. He was identified later by doctors doing the postmortem.

There were protests throughout the Handwara area in response to his murder & thousands attended his funeral. There’s no point asking why the army would execute a young man not engaged in any criminal or political activity. The number of young men executed when not engaged in militant activities, stone pelting, or protesting is an indictment of the entire occupation.

May Shahid Bashir Mir Rest In Peace. Our condolences to his family.
End the occupation. Self-determination for Kashmir.