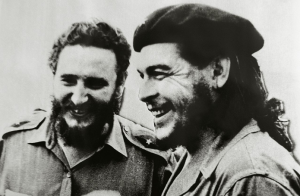 Fidel Castro died yesterday at the age of 90. He was vilified as a dictator by the US & its Cold War allies & glorified with uncritical sycophancy by others.

His political policies can only be understood in the context of the US embargo imposed to destroy Cuba as an economic & political model of freedom from exploitation. Without the Cuban Revolution & the leadership of Fidel Castro, whatever the weaknesses, Cuba would today resemble Haiti which US violent exploitation is trying to make the Caribbean showpiece of sweatshop economics & brutal tyranny.

One can make many criticisms of Fidel Castro’s policies but one can never fault him for his profound commitment to making the world a better place for working people. Forging against the insuperable odds of the US embargo, his policies eliminated homelessness in Cuba, created universal free healthcare & one of the highest literacy rates in the world. Democratic rights often got lost in the shuffle but it was not even close to a dictatorship as the US claimed.

Not every Cuban leader deserves our respect; most world leaders deserve none. One doesn’t have to be an uncritical disciple of Fidel Castro, rendering apologia for his mistakes, to honor him as a giant among us, a person who put nothing before his commitment to human freedom from exploitation. He could have been “somebody” in the world, feted by the US & world leaders if he had been willing to sacrifice that commitment to expedience & glory. Such self-aggrandizement was beneath him.

Where he failed, it is for us to understand & not deny. We should wish to emulate the best of Fidel Castro which was his resolute desire to make the world suitable for human beings to live & love in. That determination was as forceful in him at the age of 90 as it was in his youth when he led the Cuban Revolution against US colonial domination.

Photo is Fidel Castro & Che Guevara. Our deepest respect. May they Rest In Peace.