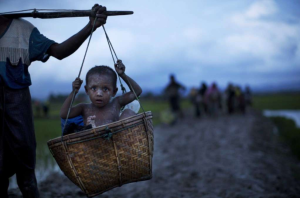 The Burmese military claims only 400 civilians have been killed since August 25th. A UN representative told media that it’s closer to 1,000 civilians but didn’t explain how they know that since the UN isn’t allowed to enter Arakan state to investigate. Rohingya refugees in Bangladesh are reporting epic-scale violence, genocidal violence by Burmese troops & Buddhist nationalist death squads, involving torching of entire villages, spraying bullets indiscriminately, stabbing & beheading civilians, corralling them into buildings & burning them alive, hunting them down like animals.

So who are we to believe? The military conducting the genocide? The UN which hasn’t even issued a mild reproach let alone a condemnation of the genocide? Or the Rohingya refugees who traveled days on foot in flight for their lives? Who you believe tells which side in this genocide you stand on.

This little guy is among the tens of thousands crossing into Bangladesh. Stand with the Rohingya people in their struggle against genocide & for human, democratic, civil, & refugee rights.