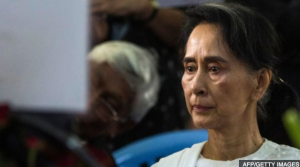 Reposting from a year ago because it elaborates US & EU reasons for playing stupid about the Suu Kyi government.

After Suu Kyi’s September 21st address to the General Assembly, US ambassador to the UN Samantha Powers praised Suu Kyi’s firm commitment to human rights & UN secretary-general Ban Ki-moon seconded that even though Myanmar will not allow the UN human rights agency (UNHCR) to set up an office in the country. The UNHCR is unlikely to be an impediment to Myanmar’s genocidal policies since in June 2016, their report said subjecting Rohingya to forced labor, sexual & other violence, persecution “would suggest” or “could amount to” crimes against humanity in Myanmar. That’s equivocal, not condemnatory language.

Other than florid diplomacies, the EU, US, & UN chief did not describe what actions the Suu Kyi regime has taken to end the genocide against Rohingya. She has only been head of state since March of this year. In truth, she is only the nominal head of state since Myanmar is still run by the military. Her government does not have control of the military & her government is 25% unelected military officials. The persecution of Rohingya is carried out by the military in league with rightwing nationalist Buddhist monks. So exactly what are the details of the program Suu Kyi has laid out to rein in the generals (who she has a collaborative relationship with) & nationalist monks to stop them from persecuting Rohingya? Will her government be able to prosecute them for human rights crimes? Who will enforce her program when the army is orchestrating the genocide?

No one could expect Suu Kyi to eliminate persecution of Rohingya in just a matter of months, especially when she has the generals making sure she accomplishes nothing in that regard. But why is she so willing to front for them & pretend there is progress? Has she changed her mind from when she insisted the pogroms against Rohingya are religious, not political disputes & that violence is committed on both sides?

What has her government done or even proposed to provide housing for the 125,000 Rohingya living in concentration camps without freedom of movement, to end forced flight & displacement, rape & other forms of sexual violence, arbitrary arrest & detention, extrajudicial executions, torture, & trafficking, all committed by the military & their monk allies in Rakhine State?

What has her regime done to ensure Rohingya access to full citizenship; civil & political rights including the right to marry & to practice their religion; the right to healthcare, jobs, education? It isn’t promising that in May 2016, she asked the US not to use the term Rohingya, which is how they self-identify, but to call them Bengali, as the military & rabid monks insist.

So why did the EU choose to discontinue the 2015 UNGA resolution on Myanmar human rights crimes when 99% of the demands haven’t even begun to be addressed? When it isn’t likely the Suu Kyi regime will ever be able to contradict the military’s genocidal policies without being thrown out of office on her ass?

Suu Kyi is not some rookie or political babe in the woods but a savvy political operator. If you get past the florid bits in her speech to the UN & listen to her exchange with Obama in Washington before the UN speech, she is proposing economic “development” & foreign investment in Myanmar as a necessary precondition for democratic & human rights for Rohingya. Actually she is counterposing development to democracy. She knows exactly what she’s saying & who she’s saying it to.

Since the EU lifted sanctions against Myanmar in 2011, it has been negotiating an investment protection treaty (likely involving sweatshop economics) to open up Myanmar to European multinational corporations. They want terms that would grant them rights & protections in regulatory disputes & other issues & they want them adjudicated not in Myanmar courts but in a European tribunal they can control. The EU set up a European Chamber of Commerce in Myanmar in December 2014. The German company BMW, the Swiss company Nestlé, the Swiss-Swedish industrial firm ABB are among those opening business in Myanmar. It appears many European companies doing so are trying to keep a low profile likely to avoid censure for sweatshop practices.

Since 2012, before she was even head of state, Suu Kyi met with Hillary Clinton, Obama, & Christine Lagarde of the IMF. Obama has lifted most sanctions on Myanmar & the US now has immense capital investments in Myanmar & some of the biggest US corporations operate there, including Coca Cola, PepsiCo., MasterCard, Visa, Cisco, Gap, Inc., Microsoft, & General Electric. During the years of sanctions, most investment, primarily based on the extractive industries, came from China & Thailand. There is now a competition shaping up in Myanmar between Chinese, Indian, & US business enterprises–& soon EU companies.

What is going on is an attempt to transition the economy from the crony capitalism of the military junta to the scorched earth sweatshop economics of neoliberal capitalism. The EU, US, India, & China want Suu Kyi as a partner in that transition & are as indifferent to genocide of Muslims as she is. That’s why the sanctions against Myanmar were dropped & why the EU scrapped its human rights resolution.The EU is a cabal of European commercial interests, not a champion of human rights.

The only good news is that there is opposition among farmers, students, environmentalists, human rights activists in Myanmar & in exile who oppose sweatshop economics, land grabs, genocide, & understand exactly the role Suu Kyi is playing in that regard.