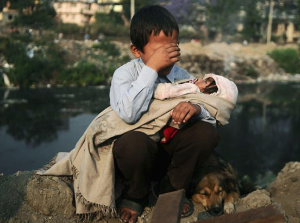 This heart-rending photo from May 2012 showed up on my newsfeed because I posted about it on January 24, 2013. The little guy is holding his baby sister after riot police in Kathmandu, Nepal forcibly evicted Dalit families who had set up an illegal settlement in an area targeted for gentrification.

The government of Nepal which took power in 2008 is often heralded as socialist by those who think the Soviet Union under Stalin represented the highest achievements of human civilization rather than a new form of barbarism.

Serendipitously I saw this post today on the FB wall of Meena Kandasamy in India who says his source is “highly reliable”:

“Slums are being hunted down, ransacked, burnt & the people are beaten down. Many people are missing. Police are still at Pattinapakkam, Nadukuppam, Nochikuppam slums & picking up people & thrashing them. There is no media coverage, & the blackout of information is because the media is being taken over by the state.
“Poor slum people are becoming the target. Police themselves are burning their vehicles. They also have orders to open fire.”

This is the first time, after years of following this, I’ve seen reports of violence against slum residents except, of course, in those several countries where they physically resist forcible eviction & face down bulldozers–most notably but not only in the Philippines. Now in the Philippines, forcible slum evictions dovetail with Duterte’s vigilante war on poor people & have made them even more violent toward residents.

Investigating these slum evictions & fires would be a dangerous assignment because one would be messing with the the thuggish forces of the real estate industry (we’re talking Trump) but that has not stopped human rights groups in several countries from doing so.

Slum evictions are a big component of neoliberal urban economic policies & human rights advocates should be paying careful attention to what is going on.