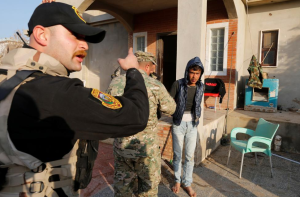 When the offensive against ISIS in Mosul, Iraq began mid-October 2016, the US Pentagon estimated there were between 3,000 & 5,000 ISIS fighters in the city. Mosul Eye, an anti-ISIS blogger from Mosul, estimated nearly double the number of ISIS fighters & claimed half were teenagers who were not trained.

Media has long reported on ISIS recruitment, conscription, & use of child soldiers. The Syrian Observatory for Human Rights (SOHR) claims ISIS uses them as fighters, suicide bombers, snipers, blood donors & that they are instructed in beheading or shooting captives.

Two weeks after the October 2016 offensive began, the SOHR reported that of the 450 ISIS fighters killed till then, 300 were children. There are no available figures on the number of ISIS fighters killed in Mosul after October 30th, including the number of children fighters. The use of child soldiers is a war crime. So if anywhere close to a half of ISIS fighters in Mosul are children—or even if only a third or fourth are children—then the conduct of war should be altered to protect them as traumatized victims & not treat them as enemy combatants.

By mid-November, hospitals near Mosul were reporting up to a dozen kids a day coming for emergency treatment of gunshot wounds, burns, mutilations, shrapnel injuries. Some were caught in crossfire, some as they fled the fighting, & some may have been ISIS fighters.

The number of overall civilian deaths & injuries have not been reported since early November but were then nearly a thousand killed in crossfire & 1,000 injured. Reports of the number of civilians who have fled are all over the place but the most recent is nearly 161,000, according to the International Organization for Migration.

This 17-year-old was detained by Iraqi soldiers in Mosul as a suspected ISIS fighter. They brought him blindfolded (considered a war crime) before an intelligence investigator who asked him “How long were you with Daesh (ISIS)? The boy “submissively” replied “Twenty days, sir.” It isn’t reported whether they released or jailed him but the intelligence officer said he appeared harmless though suspected he could pose “a latent threat after Islamic State’s days of ruling over vast swathes of territory come to an end.” What does that mean? That young kids who are bullied by soldiers & stuck in the middle of bombing & urban warfare develop political antipathies that lead them to extremist politics?

Such is the character of emancipation US-style.