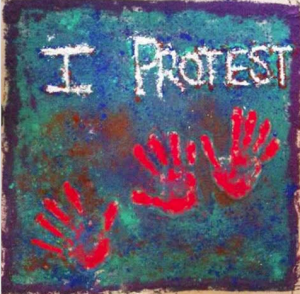 Social revolutions against powerful social forces like in Syria, Palestine, Kashmir include contending political perspectives for how to end unbearable oppression. Some political currents are conservative in their ideas about how to throw off tyranny; some more hot-headed. Some are dead wrong & play into the hands of the oppressor.

India is taking advantage of the murder of an Indian army officer from Kashmir (probably by Indian agents provocateurs) & the reckless statement of a guerrilla fighter named Zakir Moosa who threatened to behead more conservative political leaders if they impeded association with al-Qaeda & ISIS & thwarted attempts to set up a caliphate in Kashmir like in Syria & Iraq. After making his public statement, Moosa resigned from the guerrilla group & that group issued a statement disassociating from the politics he expressed.

The strategy of guerrilla warfare against sophisticated military might is a long-disputed question. The Vietnamese used it effectively as an adjunct of the North Vietnamese army which had 40 years of experience fighting the French before the US invasion.
But guerrilla warfare strategy as in Northern Ireland against the British army & against military dictatorships in Latin America during the 1970s proved to be a disaster which led to greater repression & the torture, disappearance, murders of thousands of young militants.

Ardent hatred for repression was no match for high-tech militaries armed to the teeth with allies like the US. That failure led to rancorous disputes & debates among activists around the world. The majority of activists in Kashmir rejected guerrilla warfare as a strategy in the 1980s & turned to the strategy of Intifada or movement building. This is not to condemn the remaining guerrilla fighters in Kashmir who are committed to ending tyranny but to disagree with that strategy as the most powerful & inclusive.

In an era of such sophisticated, automated military arsenals, small groups are no substitute for broad-based social mobilizations which include every constituent of society with grievances against autocracy. The spread of ISIS in the Middle East does not refute that reality. The sui generis character of ISIS & al-Qaeda is precisely what makes their existence suspicious. If ISIS did not exist, the forces of repression would have to invent them. Or at least arm them.

Kashmiri activists on social media were educating & building opposition to the occupation & had broken through the decades long news blackout. India’s use of pellet munitions, its barbarous hunt & kill operations, its use of mass rape, torture, administrative detention, forcible disappearance were internationally exposed. There were protests in cities around the world in solidarity with Kashmiris & the nascence of a solidarity movement.

India will now use the reckless statement of Zakir Moosa to discredit & vilify the Kashmiri struggle against occupation & for self-determination as another front for ISIS. That comes as no surprise since Aung San Suu Kyi is using the same allegations against Rohingya resistance in Myanmar & for Assadists it is their stock-in-trade.

Too late India! Kashmiri activists have exposed your brutal occupation. If they had not, India would not be attempting to block the internet & access to social media in Kashmir. Truth is the enemy of oppression. Solidarity will not be deterred by attempts to smear Kashmiris whose struggle has been fearless & intransigent against all odds. Their struggle is our struggle.