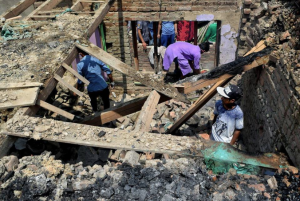 These Kashmiris are walking through the ruins of a home razed during a gunfight between a few militants & the occupying Indian army in Kakpora village of the Pulwama district in South Kashmir.
What kind of artillery is the Indian army using against a few militants armed with a few rifles that over & over again, in one hunt to kill encounter after another completely destroys homes, leaving them a pile of rubble? To what purpose?

There must be a psychological element, some military advantage in occupation to such unnecessary wanton destruction & overkill. It resonates with Israel’s destruction of family homes in the West Bank of militants arrested or killed by the Israeli occupying army.