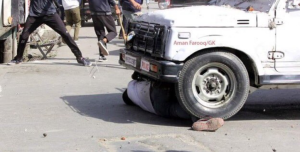 It is reported that Friday prayers ended peacefully at Jamia Mosque in Srinagar. Unlike last Friday when Indian occupying forces used tear gas & pellet guns within the mosque, injuring at least 100, including women & children. The reason there was no violence is that fewer Indian troops were deployed at the mosque after Kashmiri political leaders threatened protests. It was however after Friday prayers today that an Indian armored vehicle ran over a young man. He is in critical condition. It isn’t reported if that was near the mosque or not. Keep in mind, this is during an Indian army ceasefire for the holy month of Ramadan.