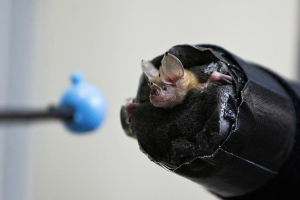 Reposting this from August 9, 2012 because a bill has just been introduced in the US Congress to stop the Veteran Administration’s medical research on dogs. It’s called the “Preventing Unkind & Painful Procedures & Experiments on Respected Species Act of 2017” or the “PUPPERS Act.”

My opposition to experimenting on live animals started in the 1960s when I saw a dog being experimented on in a lab at the University of Minnesota medical school. The suffering of the dog haunts me till today because I did not rescue it. After they were through torturing it in the name of science, they would leave it kenneled in a dark hallway whimpering in pain & bereavement. To my mind, there are no lower animals like mice, rats, or bats where torturing is allowable. I know the rationalizations offered by scientists & consider them horse manure. We need to use our great big creative minds to find other ways to advance human health not at the expense of torturing other animals.
******
Psycho-scientists in a university lab in Tel Aviv are altering this bat’s nose to study changes in the animal’s sonar beam. You can talk till the cows come home about how this kind of experimentation advances science & human knowledge & blah blah blah how it leads to cures for human disease but after all is said & done, it’s crap science based on the torture of small, helpless animals. It won’t cure any diseases or advance aviation but it does increase the disconnect between humans, the natural world, & other living creatures–kind of like psychosis.
(Photo by Nir Elias/Reuters)