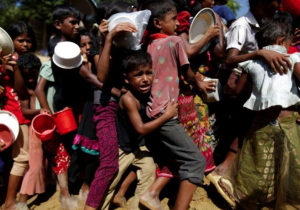 There are three narratives about Burma still clung to by politicians & in media which are mocked by realities of the Rohingya genocide.:

First is the portrayal of Aung San Suu Kyi as a fallen angel & champion of human rights heading a civilian government. What we now know for certain is that the fascist military junta has always ruled Burma & used the facade of a civilian government to remove US & European sanctions. Suu Kyi was an essential component & willing accomplice in that deception.

Second is the narrative that actions by ARSA terrorists incited the Burmese military to genocide. What we now know is that the junta was preparing militarily for the genocide long before alleged ARSA actions on August 25th. But the torching of hundreds of villages, the rape, torture, murder of hundreds & the diaspora of between 600,000 & 800,000 Rohingya are not in proportion to even the alleged ARSA actions.

Third & the most pernicious narrative is calls for repatriating Rohingya refugees back to Burma when the genocide has not yet ceased, while the junta & Suu Kyi continue to deny it is going on, when thousands of Rohingya are still fleeing for their lives. It is a vicious sarcasm that Burma & Bangladesh are engaged in discussions about an orderly method of repatriation when Bangladesh has not been able to provide an orderly method for asylum, when Burma will not take back Rohingya refugees & those repatriated for show would be subject to continuing genocide. The main issue is that Rohingya refugees are not even consulted about what they want. There can be no decisions made about their future without their direct & democratic involvement.

Focusing on repatriation is a switch & bait maneuver since Rohingya are fleeing Burma for their lives, not attempting to return to certain death. The first demand of governments must be that Burma end the genocide by immediately withdrawing all its troops & dismantling its bases in Arakan state. The need right now is not repatriation to a death trap but massive refugee assistance in Bangladesh, including asylum in whichever country they wish to relocate with safe transportation, visa rights, & access to work, housing, education, healthcare, social services.

This photo is of 5-year-old Rahim Ullah standing in a food line at a refugee camp in Cox’s Bazar, Bangladesh. If the Bangladeshi government can’t provide a humane system to feed hungry kids, who would trust it to negotiate a humane repatriation program? You cannot repatriate people back to genocide.