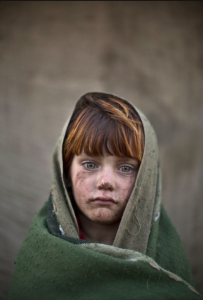 In an episodic break with the news blackout on US wars, a TV journalist spent several minutes discussing the war in Afghanistan focusing on ISIS & the Taliban without once mentioning the nearly 17-year US occupation & massive bombing. The lack & the distortions of war reporting, the deceptions about the number of US troops deployed, the focus on ISIS & the Taliban are all part of systematic Pentagon policies to blunt antiwar opposition. This cannot be effectively combated by the corrupt antiwar movement which spends most of its time defending Syrian & Russian bombing of civilians. A new antiwar movement must be built on antiwar & human rights principles opposing all military intervention in foreign countries, even under a humanitarian guise.

This is six-year-old Laiba Hazrat, an Afghan who has lived her entire life as a refugee in Pakistan.