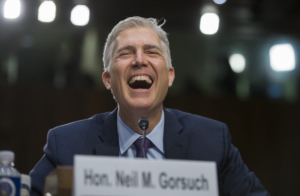 Neil Gorsuch–whose performance at his confirmation hearing for Supreme Court is nothing less than contemptible–is being treated like a toy poodle by senators.

He will be adjudicating issues like the Muslim ban, women’s reproductive rights, refugee & immigrant rights, civil liberties for Black & Latino youth incarcerated for minor offenses, the incursions of the surveillance state & the character of his interrogation by the US Senate is an international embarrassment, if not mostly a love-fest. The appropriately named Senator Flake from Arizona asked Gorsuch, “Would you rather fight 100 duck-sized horses or one horse-sized duck?”

We would like to ask Senator Flake “Would you like your ass kicked by 100 irate feminists or one irate refugee who nearly died from hypothermia because of racist immigration policies? Take your pick buster.”