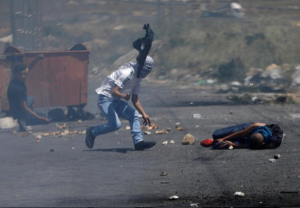 Nakba Day 2017 near Ramallah & the Israeli settlement of Beit El:
The Palestinian protester on the ground was injured in what media calls a “clash” with Israeli troops which is when Israeli soldiers attack unarmed protesters to inflict maximum harm. That is not a clash but an occupation.

As admirable & tough as these young protesters are, it is an abomination that their lives are stolen from them & their dreams unrealized because they have to fight for their very existence against occupation, apartheid, ethnic cleansing.