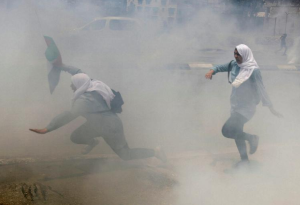 Thousands of Palestinians in the West Bank & Gaza took to the streets on Monday to commemorate Nakba Day waving flags, holding keys symbolizing the right of return to their homeland, & chanting support for 1,600 Palestinian political prisoners on hunger strike.

The Israeli occupying army was on high alert with rubber-coated steel bullets & tear gas against unarmed, peaceful protesters. According to emergency workers, at least 13 Palestinians were injured by the rubber bullets

Many of the protesters were very young schoolchildren, some were elderly. These young schoolgirls near Bethlehem are running for cover from tear gas, which is how Israel commemorates resistance to occupation.

Palestinian president ad infinitum Mahmoud Abbas didn’t dare show his face at Nakba Day since he has no place in Intifada & identifies more with the occupation. Instead he spent the day currying favor from Modi in India.