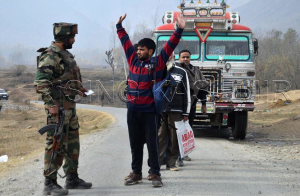 This photo from Rising Kashmir was posted on Twitter with just the caption “Kashmir in one picture.” It appears that the truck was stopped on the highway by the Indian occupying soldier & the passengers interrogated. Being from an aggressor nation, I have never lived under occupation but I traveled in Northern Ireland in the 1980s during the military occupation by English troops. It was absolutely terrifying to me to see armored vehicles with guns mounted on turrets pointed at civilians & moving in caravans patrolling at regular intervals. I have also traveled several times to Mexico (the border is only five miles from here). Mexico is occupied by its own military who guard the border crossings, patrol the highways, are an ubiquitous presence in every city & small town. On one occasion, the bus I was traveling on from Mexico City was stopped on the highway by Federal police & searched, most likely for immigrants traveling north. On another occasion, I was traveling with a young mother & her small children to visit her parents about an hour south of the border. Soldiers stopped us on the highway & made us get out of the car while they searched it & questioned us. At this point, the situation in Mexico is so fraught with danger that I no longer travel there beyond a few of the border towns.

My limited experience with military occupation was terrifying to me & it cannot be said I was ever in any real danger though it felt like I was when soldiers pointed guns at me while I stood on the sidewalk with others. So I have only a wee hint of what it must be like to live under occupation throughout ones entire life, 24-hours a day, & when the occupying army engages in frequent shootouts & hunt to kill operations. A wee hint is enough to convince me that military occupation in Palestine, Kashmir, Mexico, Arakan state, & elsewhere must be internationally opposed. Every human being has the right to live free of this kind of harassment & threat to their lives. Every human being has the right to freedom.