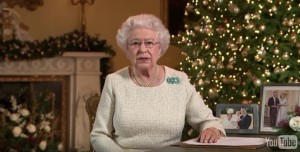 Many await my annual commentary on Betty Windsor’s Christmas address to the nation which is always such a consolation to the poor. In the ineptitude of her cognitive & oratorical skills, they can see that feudalism doesn’t make you smarter nor certainly superior. This is my commentary on her 2015 address which, believe me, is considerably more interesting than her 2017 address which I am still plumbing for any content.

In her annual Christmas address broadcast from Buckingham Palace, Betty Windsor covered a wide range of subjects in just 5 minutes. She discussed Christmas tree decorations, her honeymoon in Malta, her upcoming 90th birthday, World War II, death & grief, her new grandchild, new Commonwealth leaders, the story of Mary & Joseph’s flight from persecution & the birth of Jesus in a stable.

It’s unusual to see an older woman held in such esteem but without that tiara Betty’s oratorical talents would take quite a drubbing from critics. With that inimitable animation of hers where only her lips move, it isn’t always certain that she isn’t a ventriloquist dummy though we put incredulity aside in the interest of holiday cheer. Her speech was a string of non sequiturs, platitudes, & white lies. Let’s face it: what does WWII have to do with Jesus’ birth? And does she really expect us to believe her kids decorated the Christmas tree behind her when they need valets to wipe their own butts & brush their teeth?

The story of Jesus’ birth in a stable must resonate strongly with Betty & strengthen her affinity with Camilla since they spend most of their time at the race tracks. The only drawback is there are no trifectas on the Christmas story.

We’re told Betty wrote her own speech so it’s a damn good thing she doesn’t really run the country–& not just because of the non sequiturs. Next year Parliament might want to have someone censor what she says because her platitudes & Biblical citations could lead to political unrest. When she spoke about the flight of Joseph & Mary from persecution & the Biblical call for us to ‘love one another’, some wild-eyed human rights activists might think she’s calling for the UK to open the borders & pull back riot police from beating off refugees coming from the Calais port.

2016 will be her 90th birthday & there’s talk that at long last she’ll hand over the moochocracy to Charlie. In a pig’s eye! Betty may be platitudinous & with regrettable taste in consorts, but she’s no reckless fool when it comes to feudalism. She’s assiduously grooming Willie for the schtick.

Our Christmas address back to Betty is: “Down with feudalism.” Your kids will receive remedial job training & finally have lives worth living instead of mooching off the body politic.

(Photo is screen grab from video of Betty’s speech.)