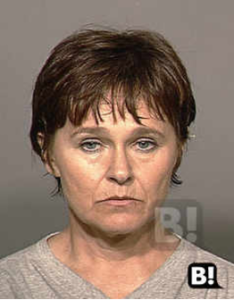 This is a very unflattering mugshot taken in 2000 when 90 people were arrested for protesting experimentation on animals. Almost half of them turned out to be undercover agents, some of whom testified against us in court. That explains the hostility I received from others in the holding cell.

I was irate at being fingerprinted for both the local police & FBI data bases & for having my mugshot taken for rioting & unlawful assembly. Had I known the damn thing would show up online I would have smiled for the camera & not scowled.

They released us at 1 am but refused to return our personal belongings so we had no car or house keys, no money, no way to get home, & no way to get in if we walked there. It took three days for police to return our stuff. They also said we had to sign forms promising not to go near the University of Minnesota & other designated areas. Yeah right. I told them to come back with the form when we were under martial law.

The trial lasted a week but the judge rendered a verdict of not guilty on all counts in less than a minute. Nevertheless, this is the event where then-FBI agent Colleen Rowley flagged my criminal record for using a WMD. The smallest WMD is twice my size & weight. It takes considerable resources to get my criminal record cleared.

You can understand the scowl on my face. No big deal now. Injustice has handed out much much worse to millions of others.