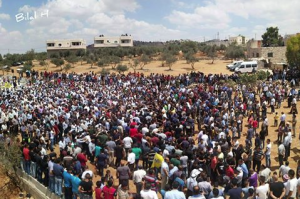 The mass funeral cortège/protest is a tragic feature of Israel’s occupation of the West Bank & of India’s occupation of Kashmir. What kind of world do we live in where our young are murdered for resisting oppression? Where our funerals become protests? Where we bury our beloved to requiems of freedom songs? Where military occupation has become the norm?

Build BDS. (It is not irrelevant that Israel sells armaments to India for use in Kashmir & trains the Indian paramilitary death squads deployed there.)