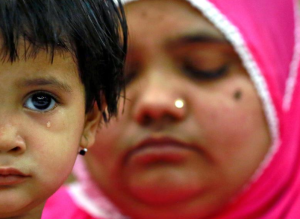 Mother’s Day is not a sentimental holiday but a time for re-commitment to solidarity, to standing with women enduring war, occupation, discrimination, racism, mass rape, forcible disappearance, ethnic cleansing.

Solidarity on Mother’s Day with the women of Syria, Afghanistan, Palestine, Iraq, Somalia, Libya, Kashmir, Myanmar; with refugees & immigrants wherever they are stranded around the world; with the Guarana, Gamela, Standing Rock & other Indigenous tribes on every continent fighting expropriation & displacement; with the mothers of the Philippines who have lost beloved to Duterte’s war on the poor & those who stand against that war; with the oppressed castes & others, including Black, Latino, & Native Americans, fighting against inequality, social hatred, & stinking discrimination for their identities; with LGBT people persecuted for their sexuality; with Muslims & all others persecuted for their beliefs.

Rebuild the international antiwar movement on a principled basis.

No human being is alien to us. Sisterhood among the oppressed is powerful.

Photo is 2-year-old Aksha Yakub Rasool & her mother Bilkis Bano at a press conference in New Delhi, India last week. Bilkis was gang raped & fourteen of her relatives, including her 3-year-old daughter, were killed during pogroms against Muslims in Gujarat state in 2002. A Mumbai court upheld the conviction of 11 men for rapes & murder. Thus far, Indian prime minister Narendra Modi has evaded justice for his role. Let Aksha & Bilkis speak for all of us taking a stand against oppression against anyone in all of its forms.