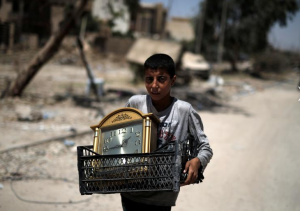 An Iraqi boy, his face contorted in misery, is fleeing the Iraqi-US coalition campaign to liberate Mosul by bombing the city & its civilian residents to smithereens.

Those who believe the US Pentagon contains an iota of humanitarian impulses & could possibly play a progressive role in fighting Assad in Syria or fighting ISIS anywhere need to have their heads examined.

No to US wars! Demand the immediate, unconditional withdrawal of all US & foreign military forces from Iraq, Syria, Yemen, Afghanistan, Libya, Somalia, & central Africa.