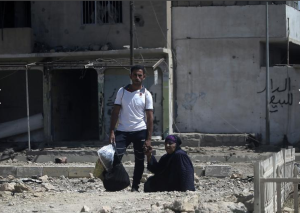 Mosul Apocalypse, emancipation US-style: this man & elderly woman are fleeing from a new Iraqi-US coalition offensive in Mosul during Ramadan.

Thousands of civilians remain in Mosul, likely many unable to leave. A good share of the city is reduced to rubble. How did such carnage come to be the concept of liberation from ISIS?

Now we know from the Amnesty International report that over $1 billion of assault rifles, mortars, & armored vehicles went from the US Pentagon to ISIS fighters.

The only principled antiwar demand is the immediate, unconditional withdrawal of all US & foreign military forces from Syria, Iraq, Afghanistan, Libya, Yemen. No to war. Out now.