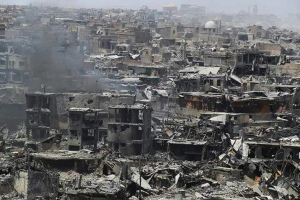 Mission accomplished in Mosul. The city is a pile of rubble & as one reporter said, stinking of corpses, but ISIS is declared defeated. One cannot tell the difference between Aleppo declared liberated by the Assad coalition & Mosul declared liberated by the US coalition. No matter which army does the “liberating,” it is what it is: a hellhole where human beings can no longer live.

If this is your vision of how to end terrorism & dictatorship, if you cannot tell the difference between revolution & counter-revolution, perhaps liberation politics are beyond you & there is another field of human endeavor your naiveté would better serve. But please don’t call yourself antiwar.