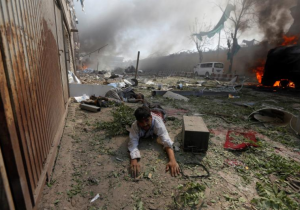 There was a suicide bombing in Kabul, Afghanistan yesterday getting more media coverage than the US war which has flown over 11,000 bombing missions since 2015–just the last 1-1/2 years of an over 15 year war.

Ninety people were killed yesterday; 463 were injured, some maybe permanently incapacitated. This man may be one of those who survived without at least physical injury. That was in the safest & most heavily fortified area of Afghanistan since it’s where foreign diplomats work, dine, socialize, receive graft, arrange drug transport. They don’t bother to count bombing fatalities in the countryside.

Media is reporting it primarily because it will justify the US intention to send more troops back to Afghanistan. There is no war photojournalism in Afghanistan; just pictures of kids selling balloons, doing Parkour, women walking down the street like there was nothing of interest going on in sleepy Afghanistan.

We cannot express strongly enough our horror & grief that the international antiwar movement has been quiescent & has not stood steadfast with the people of Afghanistan.

No to war. US-NATO out of Afghanistan. And drag the bony ass of the UN with you.

Demand the immediate, unconditional withdrawal of the US from Afghanistan. Out now!