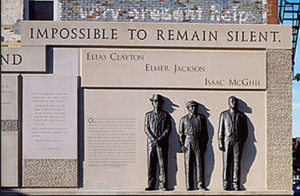 Along with the hundreds of Confederate monuments that have to come down is another genre of monuments glorifying the US Army generals like George Custer who led expeditions to exterminate American Indian tribes. American Indian tribes have long been engaged in disputes with the US National Park Service over such monuments as well as over monuments that portray Indian opposition to the genocide expeditions as massacres. Getting rid of them is posed as a dispute over political correctness when it is really an issue of historical honesty & defending the right of those targeted for genocide to resist.

The counter-movement against the racist & Confederate monuments led by American Indian & Black activists & by human rights activists has produced powerful monuments which tell the truth.

This monument dedicated in Duluth, Minnesota in 2003, memorializes a 1920 event when a mob of 10,000 whites broke into the Duluth jail, took three Black men named Elmer Jackson, Elias Clayton, & Isaac McGhie from their cells & hung them. The three men were not criminals but were in town with the circus. Their lynchings were part of the racist terror unleashed to reverse Black Reconstruction that began after the Civil War.

These kind of monuments play a role in removing the pall of ignorance & amnesia necessary to the political hold of white supremacy that has so twisted American history.