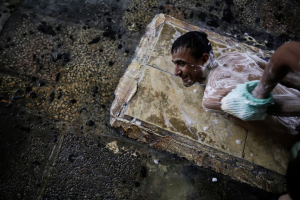 There is a distinct change in photojournalist coverage of the military siege of Mosul, Iraq. There are photos of buildings reduced to rubble, images of military equipment, a few photos from refugee camps, & this grotesque thing of a guy at a Mosul sulphur spa. There’s an apocalypse in Mosul & this is what media thought worth covering. It’s not just deranged; it is war propaganda.

The only matter of interest in the siege of Mosul is what has happened to the millions of residents being shelled & bombed so the US coalition & Iraqi forces can get to a small number of ISIS urban guerrilla fighters.

The total number of US & Iraqi forces, including special forces, aligned against ISIS in Mosul exceeds 100,000 while Iraqi forces estimate the number of ISIS fighters remaining in west Mosul at 200 to 300, down from an estimated 5,000 when the offensive began in October 2016.

The UN estimates that at least half a million people remain in west Mosul still controlled by ISIS with little food & without water or electricity since US airstrikes took out the power & water plants. They have no access to medical care for the injured & sick because airstrikes & rockets have made it impossible to leave their homes & have destroyed the roads leading out of the area.

ISIS fighters–all 200 to 300 of them–are using civilians as human shields against the airstrikes & rockets. Of course they are because they’re psycho killers. But that should be a deterrent to US & Iraqi forces bombing & shelling. It is barbarism to indiscriminately bomb hundreds of thousands of men, women, & children in the hopes that some of those bombs will take out an ISIS fighter.

But of course, the US Pentagon, Iraqi forces, & coalition allies know damn well that their military strategy against urban guerrilla fighters is barbaric. ISIS is not the primary target or they would have long ago closed down the weapons pipeline to ISIS forces in Mosul & everywhere else. The primary target is the military subordination of the civilian Iraqi population.