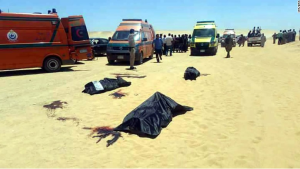 It isn’t that western media didn’t cover Thursday’s attack in Egypt on a bus of Coptic Christians. Most major media did. But unlike the Manchester bombing, it has not received nonstop, wall-to-wall coverage with feverish outrage at the crime. Although it received more coverage than most US-European wars.

It was a horrific act of terrorism. Ten to twelve gunmen traveling in 3 SUVs stormed a bus & opened fire on Coptic Christians traveling on a prayer pilgrimage. Twenty-eight people were killed, including children. Only 3 children survived. Many people were injured.
It’s likely it wouldn’t have received any coverage if it couldn’t be blamed on ISIS, if it couldn’t be manipulated to justify the “drive them out” campaign launched by the Islamophobe-in-chief in Saudi Arabia.

Media reports that Muslim leaders “rushed to condemn” the incident & in a non sequitur add “which occurred the day before the Islamic holy month of Ramadan.” There are no reports that Christian leaders other than Pope Francis “rushed to condemn” the attack. Unless we want to hammer on about the Inquisition & Christianity’s role in colonialism, enough with yoking Islam to terrorism. Theology is called on to justify barbarism but the driving force is entirely secular.

This is a monstrous crime which should not be used to war & hate monger. During the Egyptian uprising in 2012, there were attacks on Coptic churches in Cairo. Muslims rushed to their defense, surrounding them as civilian defense guards against arson & assault. That is the Islam of Ramadan.

Our solidarity with Coptic Christians in Egypt against these assaults & our condolences to the families of those who died. May they Rest In Peace.

(Photo from CNN after the attack)