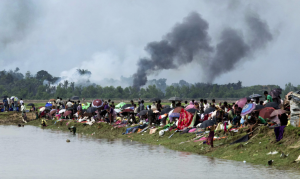 In an otherwise important article on the junta massacre at Tula Toli in Arakan, the Guardian-UK actually said: “Accounts of cruel sectarian attacks by Rohingya militants on Hindus & Buddhists in Rakhine have also surfaced. Around 26,000 non-Muslims have been displaced in the violence.” Such equivocations, as are present in most media, are part of turning genocide into communal violence & are outright lies. They know damn well that a genocide is going on. What about showing a little investigative integrity & asking “By whose accounts”? The juntas? If they don’t know how many Rohingya have died, how the hell do they know how many Hindus & Buddhists have? Is the situation so bad that Hindus & Buddhists are also fleeing for their lives?

Photo is Rohingya refugees on the border between Burma & Bangladesh which the Burmese military has laid landmines.