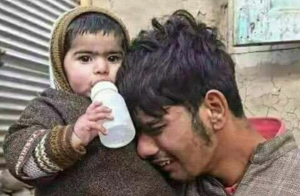 This grieving man is holding 11-month-old Zaira at the funeral prayers of her 25-year-old mother Rubina Jan in the Shopian district about 45 km from Srinagar. The young mother was killed during one the Indian occupying armies late night prowl to kill operations when they opened fire on a group of unarmed defenseless protesters. A nearby hospital admitted over 20 injured protesters, some with gun shot injuries. Four family homes were reduced to rubble by the soldiers.

The Indian army version of the story isn’t even worth reporting. Not just because it’s lies & justifications but because of the casual disregard army officials express for Kashmiri human life. This kind of barbaric operation is India’s version of counterinsurgency & it’s worth noting that India contracted with Israel to train its counterinsurgency troops.

Our sincere condolences to the family & friends of Rubina Jan & our solidarity with those who have been injured & lost their homes. May our sister Rubina Rest In Peace.