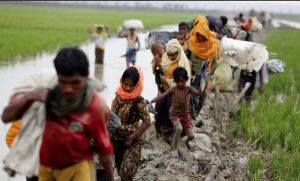 Believe it or not, many Assad supporters are openly supporting the Burmese government in its genocide against the Rohingya. In an article titled “The Rohingya Of Myanmar: Pawns In An Anglo-Chinese Proxy War Fought By Saudi Jihadists” the Assadist blog Moon of Alabama claims that ethnic conflict in Arakan “morphed” into a jihadist guerrilla war now financed & led from Saudi Arabia. What is at issue, according to the article, is oil & natural gas pipelines from Burma’s offshore fields off the coast of Arakan state to China. It’s a remarkable non sequitur to go from oil pipelines to jihadi guerrillas but such is the intellectual bankruptcy of Assadism.

The Shwe pipeline is a joint project between China & the Burmese military which controls the economy & is part of Burma’s neoliberal economics program. China has billions invested in joint pipeline & mining projects with the Burmese junta, as do consortiums of Indian & South Korean corporations invested in the Shwe fields. These have entailed land grabs from farmers, environmental & cultural ruin, militarization of the states where the projects are & where the pipelines pass through, & human rights abuses including forced relocation of villagers, forced labor, torture, rape, extrajudicial killings. It sounds very much like neoliberal projects in Latin American which indigenous tribes have been battling, most notably in Brazil & Peru & now in Venezuela.

There have been many protests & popular movements against the projects. The extreme violence & repression of the military against protesters is because analysts expect the Shwe oil fields to become the government’s largest single source of foreign income. This does not mean that the genocide of the Rohingya is solely motivated by neoliberal scorched earth policies but of course it is a powerful factor in the accelerated pace of the genocide. There is no association between the Rohingya & Saudi Arabian jihadis; there is no proxy war, just as there isn’t one in Syria.

Men & women of good will stand with the Rohingya people in their struggle for full human, democratic, civil, & refugee rights. And they stand with the Syrian revolution against Assad’s dictatorship.

(Photo of fleeing Rohingya from Remember Qana on Twitter)

Moon of Alabama article in all its rancid ignominy: http://www.moonofalabama.org/2017/09/the-rohingya-of-myanmar-pawns-in-an-anglo-chinese-proxy-war-fought-by-saudi-jihadists.html#more