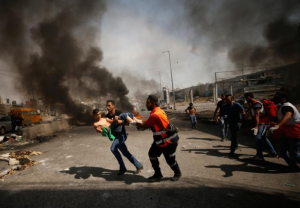 Palestinian protesters are carrying an injured mate away from a protest to support political prisoners on hunger strike in Israeli prisons. The protest near the Qalandiya checkpoint near the West Bank city of Ramallah was of course attacked by Israeli soldiers.

This is what was going on whilst Mahmoud Abbas was welcoming Trump to the West Bank town of Bethlehem. As Trump’s motorcade crossed through the Israeli checkpoint at Bethlehem, he was guarded by Palestinian police under Abbas’ control & greeted with his face on a billboard saying “The city of peace welcomes the man of peace.” How low can Abbas go?

Why weren’t Palestinian police sent to protect Palestinian protesters from attack? Why is Abbas groveling to Trump whilst the US bankrolls the occupation of the West Bank, Gaza, & East Jerusalem, the carpet bombing of Gaza, & subsidizes Zionist settlers from the US who move & resettle in the West Bank?

Support Palestinian self-determination by honoring & building the economic & cultural boycott of Israel (BDS). Buy nothing with a barcode beginning with 729 & check every label on every product.