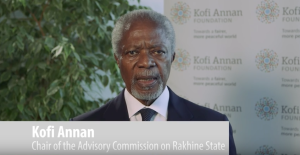 Kofi Annan’s commission on Arakan state just issued its interim report & recommendations at a press conference in Yangon. On what, we aren’t sure since the mandate by Aung San Suu Kyi was intentionally ambiguous but excluded any investigation of human rights crimes. Annan tried to play cagey & on one hand would say his mandate was not to investigate human rights crimes but on the other would report that in his whirlwind four days in Arakan meeting with big wheels he never once saw signs of genocide.

State Counsellor Suu Kyi ate up the report.& her office issued a statement of concurrence. That’s because it completely ignores the mountains of evidence for genocide against Rohingya. The report isn’t just a piece of rubbish that goes beyond our wildest expectations of a snow-job. It is a steaming pile of horse manure.

It is 15-pages long just to show how thoroughly the commission did its work (whatever its work was) & explicitly refuses to use the name Rohingya “in line with the request of the State Counsellor,” (just to show how independent it was). The primary concern of the report is that those who attacked the border guards last October be apprehended & brought to justice. Interesting, because Suu Kyi’s regime blamed those attacks on Rohingya “jihadists” with ties to ISIS & used that to unleash months of extreme violence against Rohingya, including mass rape, torching hundreds of homes, extrajudicial executions, disappearances, torture, incarceration of thousands including small children, & forced exile of over 70,000. But now we learn from the report that the regime still doesn’t know who the perpetrators were. And the commission didn’t think that worth investigating? Of course not. They were paid to see no evil, hear no evil, report what Suu Kyi told them to.

Ironically, our man Annan calls for humanitarian aid workers & journalists to be allowed unfettered entrance to Arakan state. Ironic because he spent a total of four days there in the past 7 months of his investigation. The commission never had to get off their asses to come up with the blithering in this report.

What do you say about a guy who covers for genocide in exchange for a fee? Language hasn’t the capacity to express the contempt Annan deserves. Some Arab cultures throw shoes to express contempt. In the American midwest, we throw horse manure, which in this case is more suitable.