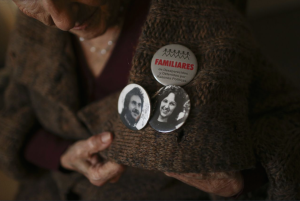 It will be six weeks tomorrow since Khurram Parvez was arrested in Srinagar & jailed indefinitely under India’s Public Safety Act. The Indian government is going to try to wait us out, hoping we abandon any notion that an international defense campaign will influence them & get him out of jail.

They’ve been using live ammo, tear gas & sound grenades, pellet guns, night home invasions & mass arrests for 110 days–nearly four months–& that has not daunted the spirit of Kashmiri Intifada. So why in the hell would India think activists could ever forget Khurram Parvez & the important role he plays as head of the Jammu Kashmir Coalition of Civil Society which investigates human rights crimes including disappearances & defends the victims?

His political importance goes way beyond Kashmir. For decades, hundreds of thousands of people have been disappeared under repressive regimes all over the world. Most of those countries have active organizations representing the disappeared & their grieving families but political organizing around this issue has never been given the international prominence & coordination it demands.

In his work as chair of the Asian Federation Against Involuntary Disappearances (AFAD), Khurram initiated coordination between organizations of the disappeared throughout South Asia as well as Latin America. That campaign would put the spotlight on this monstrous crime where families can never be reconciled with the grief & torment until there is justice.

This photo is Angela “Lita” Boitano, president of “Families of the Disappeared & Detained for Political Reasons in Argentina. The badges are her son Miquel Angel & daughter Adrian Silvia, both among the estimated 30,000 disappeared during Argentina’s dirty war between 1974 & 1983. The work of Khurram & AFAD would strengthen the work of such groups & pressure these governments to come clean & to end the practice of disappearance. That’s how important his work & defense are.

Demanding the immediate, unconditional release of Khurram Parvez is as important to all of us as it is to Kashmiris. You can begin by liking & sharing his FB defense campaign page: