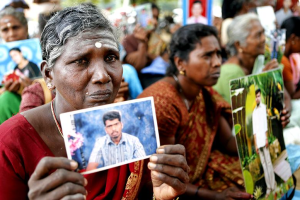 These are Sri Lankan mothers protesting the forcible disappearance of their children. The estimated number of Sri Lankans disappeared by the military is disputed (they always are disputed to hide the magnitude of the crimes) but goes as high as 65,000 people.

That is true throughout the South Asian region & is the reason the Asian Federation Against Involuntary Disappearances (AFAD) was formed. Khurram Parvez is the chairperson of AFAD which is without question one of the reasons for his arrest & why AFAD activists in several countries are protesting for his release. Under his leadership, AFAD was building political collaboration with organizations for the disappeared in Latin America & elsewhere.

Khurram Parvez is an extraordinary individual because even in jail, as he has to deal with his disability without proper medical care & worries about his family, he is already documenting the torture of other detainees he encounters in jail as part of his work with the Jammu Kashmir Coalition of Civil Society (JKCCS).

Activists like him don’t do this kind of dangerous work so they can win honorifics like the Nobel Peace Prize. They’re not driven by narcissism & need for recognition. He said, “My struggle for justice forms only a part of the larger struggle of my co-detenues & all those wrongly detained. Your solidarity is therefore to the larger struggle for justice & is greatly appreciated.” He places his defense within the broader political context of defending all of those detained.

If we do not vigorously defend him, it will be easier in Kashmir, India, Sri Lanka, the Philippines, Indonesia, Thailand, & elsewhere for regimes to simply pick up activists & disappear them. So his defense, like he says, is part of the larger struggle for human rights. But it is an essential part.