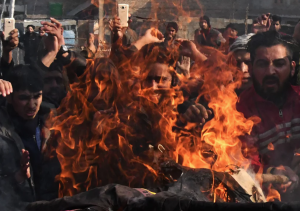 The caption to this photo read, “Kashmiri Shia Muslims burn an effigy of Donald Trump during protests about the US president’s actions over Israel.” That caption is fully in the Islamophobic spirit of the times, trying to generate religious factionalism within Islam where there is none. So much wiser to remember what Kashmiri human rights leader Khurram Parvez once said: “In the street protests in Kashmir, Sufis, Shias, Sunnis, Wahabis, Jamaatis, Sikhs, less religious, non religious–everyone is participating. Yet apologists of Indian occupation & violence say Kashmir problem is due to wahabization.” The same ecumenical spirit is almost certainly true for Kashmiri protests in solidarity with Palestinians.

(PS: Love the effigy burning, which is not part of US protest traditions.)