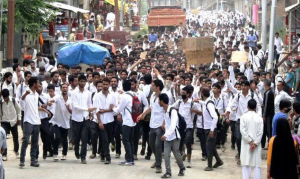 This photo from July 12, 2014 is Kashmiri youth protesting in solidarity with Palestinians in Gaza during Israel’s murderous seven-week carpet bombing siege which millions protested around the world.

Sometimes Kashmiri youth have asked why there are no solidarity protests with Kashmir by Palestinians. Only because of the news blackout about Kashmir. Like the rest of the world, Palestinians did not know about the Kashmiri struggle or the political links & affinities between them in the struggle against military occupation & colonialism. Because of the work Kashmiri activists have done on social media, active bonds of solidarity can now be forged between these two monumental struggles whose victory can change the balance of forces in the world to the advantage of the oppressed.

This photo was shared to my wall by Kashmiri activist Sheikh Sameer.