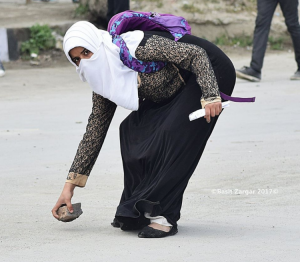 Hard to understand the moralizing about stone pelting when you read about the gruesome encounter last night in Tral, Kashmir between the Indian army & militants. Maybe you have to be a nationalist to be that obtuse not to see the scale of distinctions between stone pelters & platoons armed with machine & submachine guns, sniper & assault rifles, combat shotguns, semi-automatic pistols, pellet guns, grenades, mortars, & rocket launchers.

After the encounter where two were killed, protests erupted & prayer memorials were held all over Kashmir. Another young man was killed for protesting.

Imagine that the Indian army did this on the eve of Ramadan, a solemn period for Muslims. Not that they don’t do this every day. But one would hope for even a shred of decency, a momentary moratorium on barbarism so that Kashmiris could observe a sacred ritual. That isn’t the nature of militarism & occupation. It is bereft of humanity. That’s why it must be decisively defeated.

India is again expanding its internet blackout in order to increase barbarism without the testimony & documentation of Kashmiris on social media. Kashmiris cannot be allowed to stand alone. If their voices are silenced, they must be able to trust the voices of international solidarity will increase efforts to educate others about their struggle, to put political pressure on India, & to stand with them every step of the way.

A tribute to this young woman student stone pelter for standing against an army.