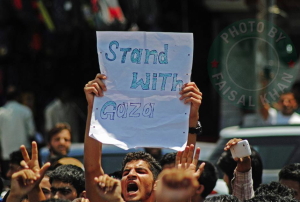 Because this is the 3rd anniversary of the last Israeli carpet bombing siege over Gaza, I am coming across a whole stash of photos posted to my wall by Kashmiri activists (most notably Sheikh Sameer & INn AMm) of protests in solidarity with Palestinians. I’m reposting some of them not only to show the bonds of solidarity but to commemorate that murderous siege which was an inferno for Palestinians & a living hell just to witness.

This photo is a protest in Srinagar.

End the blockade of Gaza. End the occupation of the West Bank & East Jerusalem. Self-determination for Palestinians.