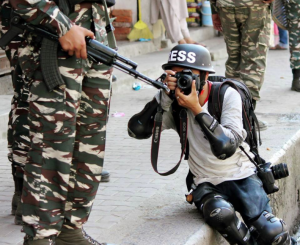 Photojournalism is one of the most dangerous occupations in the world with a very high death rate–not only from getting caught in crossfire but from being targeted by the aggressor combatants like the Indian army in Kashmir. This is a photo of Kashmiri Aasif Shafi from last Friday, obviously in the midst of a confrontation. Today, he was driving to cover a braid-chopping incident when CRPF (Indian counterinsurgency troops) stopped his car, asked for his papers, & then assaulted him.

Kashmiris & their human rights supporters around the world are absolutely dependent on these fearless activists/photojournalists to present the reality of the brutal occupation to the world. We have to take their safety very seriously & raise hell when they are threatened, assaulted, arrested. The only way to do that is to maximize political pressure on the Indian government by internationally exposing every instance when they attempt to harm photojournalists. Already this year, one photojournalist has been arrested. A few years ago, one returned from work to find his house surrounded by CRPF troops, his wife & child terrorized, & his house vandalized. Now Aasif has been assaulted. We can’t let these instances pass by without an international uproar.

Stand with Kashmiri photojournalists. End the occupation. Self-determination for Kashmir.