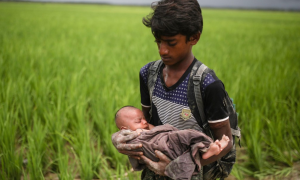 The Washington Post published a recent article titled “The ‘ethnic cleansing’ of the Rohingya”. Putting quotes around ethnic cleansing suggests ambiguity, the tentative appraisal which characterizes this article & most media coverage of the genocide against the Rohingya people. It is always framed as if there might be two sides to genocide & that it all began when Rohingya terrorists associated with Al-Qaeda attacked police stations–information media accepts from the junta which is carrying out the genocide. What kind of journalism is that? Did it ever dawn on them that the so-called terrorists might be self-defense teams to protect Rohingya from military & nationalist death squads?

One of the most profound insights in the article was “The Rohingya are intensely unpopular in Burma.” Do you think? That would be the character of genocide. But it’s not usually referred to as popularity so much as racism, ethnic supremacy, xenophobia, fascism. Just for once, you wish a major media source would speak the truth, wouldn’t pull its punches or elaborate false scenarios, would refuse to cover for the generals & Suu Kyi. But that isn’t how “journalism” works.

Estimates now of Rohingya refugees are between 420,000 & half a million. It isn’t what the Washington Post reports that matters but what they do.

This young boy carrying an infant is wading through the Naf river to cross the border. It isn’t reported whether their parents survived. The thing about photojournalism is that photos often belie the written reports intended to deceive.