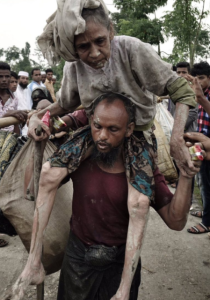 Jonathan Head, the BBC correspondent reporting about Burma, has published both a video & written report from the guided tour a group of journalists were allowed in Arakan state under guard by the army. Both reports confirm what traumatized refugees are claiming: a deliberate policy of genocide. Why else would now 370,000 people flee to another country while pregnant, carrying parents on their backs & in baskets, & as unaccompanied children? Despite the horrors of his report, Head just can’t help himself from parking his ass on the fence. He doesn’t even once use the terms genocide or ethnic cleansing. This is how he introduced the nightmare of what he witnessed:

“…the government has arguments that need to be heard. It is now facing an armed insurgency, albeit one some would argue has been self-inflicted. The communal conflict in Rakhine state has a long history, & would be difficult for any government to deal with.”

When he went to the military official in charge to hear ‘the arguments that need to be heard’, this is what the colonel said:

“…Bengali terrorists, as they call the militants of the Arakan Rohingya Salvation Army, had taken control of Rohingya villages, & forced them to offer one man per household as a fighter. Those who refused to comply have their houses burned, he said. He accused the militants of planting mines & destroying three bridges.

“I asked whether he was saying that all of the dozens of burned villages had been destroyed by the militants. He confirmed that was the government’s position. Responding to a question about military atrocities, he waved it away. “Where is the proof?” he asked. “Look at those women,” he meant the Rohingya refugees, “who are making these claims – would anyone want to rape them?””

For any journalist with half an ounce of intellectual or investigative rigor, this nationalist, racist, misogynist crap would discredit all government claims about Rohingya terrorists & he would hotfoot it to the refugees to find out what really happened. At least, such a journalist would report only what he knows for sure & not believe one single allegation coming from the military or Suu Kyi.

But read his report because despite Head’s equivocations, he confirms exactly what the refugees are saying:

(Photo of refugee carrying his mother from Arakan News Agency)